I’m Mocha. You helped save me. Read my challenging story below.

These are their tales of tragedy to triumph

Our Critical Care Program cases are all desperate animals

that have been victims of cruelty, abuse or extreme medical neglect.

The narratives below are just a small glimpse of the many animals rescued with your help during 2021. When you read their touching stories and view their before-and-after photos you can see how your donations help PACC911 make a powerful difference saving pet lives in our community.

Scroll down and click on each pet’s name to reveal their extraordinary story and photos.

All the rescue groups mentioned in these stories are PACC911 partners.  As part of our coalition they are eligible to request these special Critical Care grants. To see how our program works go here.

These souls were saved because someone decided to make a difference. You can be that person.  Just click the donate button at the bottom of this page.

The 2021 Before and After Stories!

Lt. Dan - His attacker hacked off back legs with a machete 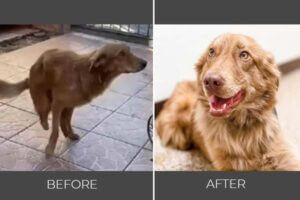 The injustices to animals that go unpunished are beyond comprehension; these acts of cruelty revolt and appall all compassionate people.

In Hermosillo Mexico, Lt Dan was brutally attacked and mutilated by the “Machete Man” who cut off the lower half of his back legs rendering him unable to support his body. How he survived in agony on the streets before being rescued by angels on both sides of the border is unknown.

But what is known is the miracle that happened next. With one call to PACC911, the Critical Care Program offered assistance to Sky Sanctuary who rushed Lt. Dan to an orthopedic specialist working with a prosthetics Group, and Lt. Dan was fitted for a new set of back legs!

In his loving foster home this amazing survivor has learned that he can once again run and play and enjoy a new life of love and frolic. His unbroken spirit and love for everyone he meets testifies to the resilience of forgiveness that animals truly have. 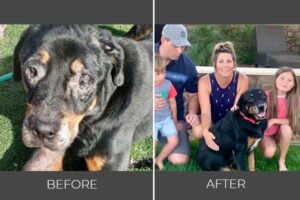 Collapsed in the searing Arizona heat, his exhausted body could not take one step more.

It was a hot summer Arizona day and Vadar could not continue on. His emaciated body had given up. He had gone as far as he could go. His back legs no longer worked, his eyes were swollen and crusted shut and his once beautiful coat was thinned and missing in large clumps.

Thankfully when he collapsed it was in the yard of a good samaritan who contacted Rotten Rottie Rescue. They immediately responded and came to his aid.

High hopes soon faded. Vadar had a current microchip and it was hoped that he may have gotten lost or escaped with frantic owners looking for him. But sadly, they were not. They never responded to the multiple attempts to reach them. Most likely he had been abandoned him without a care, unconcerned about his well-being or any harm that might befall him. His neglected state indicated that he probably never any received care during his life. He had been dismissed, left behind, forgotten.

Rotten Rottie, with assistance from the PACC911’s Critical Care Program, was ready to begin a new chapter in Vadar’s life and would make sure it would be his best chapter! He would know nothing but unconditional love from this moment forward. In the following weeks, Vadar proved that he was ready to become the best version of himself. With a healthy diet and all the meds and love he needed, his infections healed, he gained his weight back, and grew an even more beautiful coat.

Then the magic happened. Vadar was adopted by the perfect family who fell head over heels in love with him! He will never be forgotten or dismissed again. He is now cherished in his forever home. 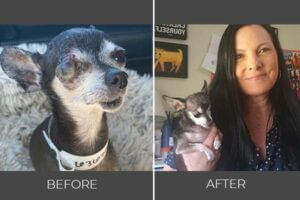 How did she ever survive?

How does a tiny senior dog with a ruptured and infected eye survive life on the streets of Phoenix in scorching heat?

Hiccup was living such a life of misery, fear and pain as she struggled to stay alive. She was obviously a case of serious human abuse also having a puncture wound on the top of her head, so severe that her fractured skull was exposed.

She was at last picked up by Sky Sanctuary who rushed her to emergency veterinary care with help from PACC911’s Critical Care Program.

Her life was saved and her future bright as she was adopted by PACC911’s own Tina Lopez and is loved to the moon for the rest of her life!

Beyonce - Dying kitten tossed away by side of road 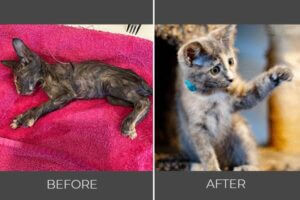 Found by the side of the road by a Good Samaritan, Beyonce was rushed to Pinal County Animal Control. Estimated to be a mere seven weeks old she was alarmingly underweight at only 374 grams. No one thought this frail baby kitten would even survive the night.

Beyonce had endured far too much in her young life. Not only was she grossly malnourished, but this poor baby was dangerously dehydrated and suffered from debilitating diarrhea, a severe upper respiratory infection and the worst tick infestation the veterinarian had ever seen.

Such a brave little girl, she  underwent a challenging treatment over the next few days, which allowed her saviors to comb out the ticks for as long as she could bear it. A survivor, Beyonce grew into a beautiful, healthy little kitten and was adopted into a loving family. 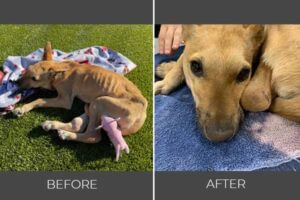 Victim of a hoarder, she feared all people

Melody’s life of misery finally changed when she was rescued from a horrible hoarding situation by Freedom Brothers Rescue. She never knew compassion, love or kindness until the day she and twelve other puppies were taken from the depths of depravity to a kinder place on her path to a new life.

Her condition was dreadful. Emaciated and frail, her body was covered in ticks and infected. Her limbs were deformed from untreated valley fever. Thanks to support from PACC911’s Critical Care Program, Freedom Brothers provided Melody the veterinary care she so desperately needed and she happily made great progress.

Pinky - Decaying in a ditch, mouth rotting away from chemo lesions 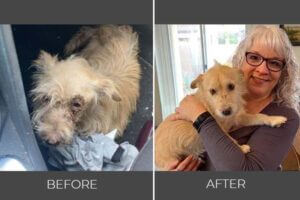 Discovered in a drainage ditch, hardly able to breathe.

Before arriving at Independence Day Rescue where his new and beautiful life began, Pinky had traveled a rough road.

He was found in a drainage ditch weighing only eight pounds, or half his healthy body weight. His mouth had undergone chemotherapy treatments for cancer, leaving holes in his pallet and very bad teeth.  This was coupled with valley and tick fever. Pinky could hardly take his next breath.

Independence Day Rescue came to Pinky’s aid with help from PACC911’s Critical Care Program to assist with expenses far in excess of what most rescues can incur.

This sweet dog underwent desperately needed surgeries to close the holes in his pallet. Once able to eat, he regained his weight to a healthy sixteen pounds. But best of all, hewas adopted into a family who love him to bitss.

Now named JAXX, he has so much love to share and wins the hearts of everyone he meets. 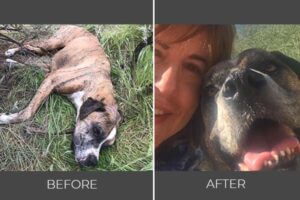 Mocha, a stray, had been rescued by a caring Samaritan, but escaped again. She slid down a hill into a wash, only to run faster than one could follow.  As escape artists are hard to find and trap, Boxer Luv teamed up with Hartt Rescue volunteers to trap this frightened runaway.

Days later she was found a breath away from death in the heat of the desert. She was exhausted, emaciated, dehydrated and was rushed to the hospital for life saving care where it was learned she also had a serious heart worm infection.

PACC911’s Critical Care Program kicked in and as a team with Boxer luv her expenses were covered.

Because Mocha battles these and other medical issues and is 11 years old, she is in her permanent foster home and is very adored as a forever Boxer Luv Girl. She is enjoying her senior years with her wonderful foster family.

Check Out these Powerful Before-and-After Stories